My calf muscles were demanding a day off and I was more than happy to oblige, so I slept through my alarm. I lazed around until about 9am when I went upstairs to let my host know I planned to stay another night. That’s when I was told I couldn’t stay again. He was leaving town to visit family for Diwali. Shit! I could either pack up and move guesthouses, or pack up and ride on. I chose the latter.

Once again I found myself riding through the spectacular scenery of Nepal’s hill country. The first half was a nice mix of ups and downs, but then the down took me to a river crossing, from where the only way was up, and up and up. The rest of the day was spent climbing to the village of Ranke, where I arrived just in time to witness a beautiful sunset. I checked into a local lodge (just 300r, AU$3.75 a night), then set about having a wash. It’s far too cold to stand under running water (not that there was a shower head here anyway) but I found it just bearable to wash myself with tiny amounts of water at a time. This way my whole body didn’t freeze to death at once. I had time for a walk before dinner. Just down the road I stood amongst a small crowd watching a group of dancers putting on a performance.

Diwali celebrations were in full swing today. During my ride, every now and then a troupie full of youths (some inside, some hanging off the back and some sitting on the roof) would cruise past. I would know when they were coming from the approaching music and yelling, and as they passed I would be cheered enthusiastically. I learned that singing and dancing groups travel between villages and put on shows all day. I got to see a great performance during my ride and another great show here in Ranke. Little kids continued to endanger themselves with fireworks, but the resulting light shows added an awesome element to the festive atmosphere.

I just had a lovely walk through the village. Decorative lights twinkled on the surrounding hills and the sky was packed with stars. The Milky Way was clearly visible. I’m trying not to think about the state of my legs after today’s unexpected efforts – they are pretty sore and I’m not sure if I’ll be riding tomorrow or not. 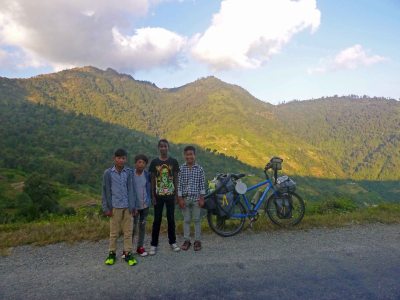