I have calmed down a bit now, but earlier this evening I was struggling to feel happy, my energy reserves having been obliterated by another day featuring a demoralising headwind. Today was worse than yesterday and it left me feeling completely destroyed, both physically and mentally. I very nearly stopped in Alichur mid-afternoon, but decided to push on, figuring that every kilometre battled today is one less kilometre I need to tackle tomorrow. I figured I’d rather battle my demons immediately than put off the inevitable fight.

The other thing getting me down today was an incredibly sore blister on my bum, the result of a serious error of judgement. I have been getting minor blisters on my bum for a while now and the day before I reached Murghab I decided it was because of my gel seat cover. Over time, the gel cover has deformed and shifted its position on my Brooks saddle. Lately this has meant I have been sitting on one of its seams, which I assumed was causing the blisters. When I rode the 10km day to reach Murghab, I removed the gel cover and was delighted at the extremely comfortable ride I had without it. On arrival in town, I threw the cover in the bin along with my smelly plastic bag containing three days’ worth of rubbish. This was the mistake. It turns out that while the raw Brooks saddle might feel comfortable for 10km, it does not remain comfortable when riding 60km. The blister started forming yesterday and today it was a painful sore. There is nothing I can really do about it except put up with the pain and hope it doesn’t get infected before I have a proper break from the bike, which won’t be for some time.

The day took me through more beautiful scenery, although I didn’t appreciate it as much as I would have if I wasn’t being tortured by the weather or suffering bum pain. I stopped early to give myself a bit more of a rest than normal, but got even more miserable when I couldn’t get my stove to light. I gave up pretty quickly and filled my stomach with oats instead. I am feeling a little better now as I have just spent the last hour listening to music as it has gotten dark. I have just braved the cold wind outside to brush my teeth and go the toilet, so now it’s time to tuck myself up nice and warm and get a good night’s sleep. 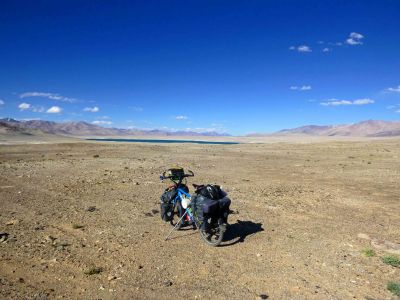