I can’t believe my luck: I had another perfect day of weather today when I had expected rain. It was super cold though. Even though I warmed up once I got snuggled into bed, I woke up cold in the early morning and no amount of squirming brought back any warmth. The good thing was that I wasn’t fast asleep when my alarm went off so my period of snoozing was relatively short. I got moving in the dark and rugged up with three layers all over: two pairs of socks under my waterproof pair, two pairs of leggings under my waterproof pants and two long-sleeve shirts under my waterproof jacket. Plus shoes, neck/face warmer, beanie and gloves. After having breakfast and packing everything up as much as possible while still inside the tent, I emerged to find outside like a winter wonderland. Outside of my culvert, everything was covered in a thick coating of frost. The ground crunched under my feet and the air filled with my warm breath.

Despite the cold, the sun was out and I slowly began to thaw out as I rode. My fingers and toes hurt as they began to warm up slowly. As I began to regain feeling, I found I could turn my attention to appreciating the scenery rather than being distracted by the pain. I continued to climb through the morning, eventually reaching a broad valley through which I traversed only relatively low undulations. All around me for the entire day were snow-topped mountains. With my food running out, I snacked on random bits and pieces to get me through the 70km to the border town of Niki. I was hoping to find a market here but the place felt like a ghost town and the only supermarket I passed (marked by an old sign) looked abandoned. Border formalities were super short and sweet. I didn’t even have to unstraddle my bike as I passed the booths where my passport was stamped. Neither customs were interested inintuitively looking at my bike or gear. The only time I had to say anything was when the Macedonian border officer asked me where I was going. When I told him Ohrid, he asked me what I will do when I hit snow on the road. He explained that it has recently snowed on the mountain passes between here and Ohrid. I said I’d probably have to hitch a ride in a truck. As I rode on I thought about it properly, ‘Shit, that’s actually a pretty good question. What am I going to do when/if I hit snow.’

As I continued my way from the border I began to assess my options for the night. If I wanted to camp then I needed to find some water. I could also do with a bit more food, but this meant finding an ATM to get some local currency first. I began to consider staying for the night in Bitola, where I could get cash, stock up on food and research the road conditions.

I soon came across a street-side water tap, which gave me my water, and opened up the option of camping. I also turned on my phone to check if I was within range of Bitola. It was only 10km away, so yes, Bitola was a real option. I decided I would ride into Bitola to get some cash and food supplies, and by the time I got these things I would know whether I wanted to ride out of the city to camp, or stay the night. In the end I decided to stay the night. I had three accommodation options marked on my map. The first was a backpacker hostel and this was where I chose to stay. I got my things inside then enjoyed a lukewarm shower. After an internet catch-up session, I wandered into the city for some dinner. At one restaurant I had a chicken schnitzel with vegetables, and then at a fast food joint I had a burger. I also did my food shopping.

The weather predictors tell me it is going to start raining overnight and the rain will only get heavier in coming days. I have decided to make the push for Ohrid. The distance sounds very achievable, at 70km, but with two big climbs and probably snow along the way, I have made sure I have enough food to support me if it takes two days instead of one.

Health update: my eye is almost better. It got to its worst a few days ago, when I noticed during a lunch break that the lump was starting to leak creamy fluid. I got to work and squeezed out a bunch of infection-gunk. This immediately made it feel better. Since then the infection has cleared, the swelling has gone down, the wound has sealed and it is just about healed. My knees have taken a pounding with riding into headwind and the recent climbing, but my Achilles is now just background pain. I think riding without my seat cover had been good for it as it has adjusted my sitting position in a favourable way, suggesting I should have lowered my seat a little earlier. 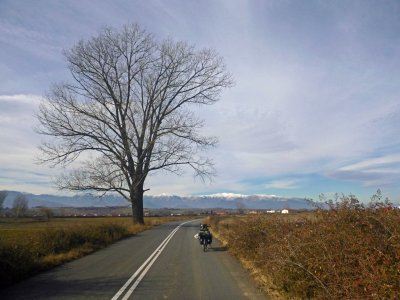